New age technology has already infiltrated many sectors, with automation steering the wheel of digital transformation at full speed. Sectors that are still struggling to stay adrift with the change might face serious challenges to stay alive in the coming days. Banking can be cited as one such sector here. Automation in banking is the need of the hour, especially when Fintechs are directly threatening their very existence. As of November 2021, there were 10,755 Fintech startups in the US.

It is highly unlikely that Fintech startups will sign the death penalty for traditional banks. But the former has reduced traditional banks’ dependency on brick and mortar branches to function to a certain extent. Yet, a few banks have refuted the benefits of automation in banking; a few others show laxity in adopting the change. Thankfully, nearly all major banks now have smartphone apps.

But, a complete digital transition goes beyond online banking and mobile applications. Like IBM said, “Innovation is no longer optional, but has become a necessity, fundamental to the success of traditional banks,” the latter can no longer stay oblivious to the inevitable change.

That brings us to the next big question – how automation can change the banking sector entirely? To answer that, we need first to understand –

What is Robotic Process Automation in Banking

Robotic Process Automation, aka RPA in banking, implies incorporating automated tools to address the pressing demands of the sector by maximizing their efficiency and minimizing operational costs. As per McKinsey, machines and software bots will cater to 10-25% of tasks in the coming days.

Hence, many banks are speeding up the deployment of the latest automation technologies but are often faced with unprecedented challenges. Let’s elucidate further –

Yes, RPA is the key for traditional banks to survive the competitive market of online banking services and FinTechs. But, the major question remains to be answered – Are banks ready for automation in banking?

Any new change is always welcomed with resistance. Many factors attribute to that, a few of them being –

As mentioned earlier, any new change is often faced with resistance. A rapid shift in mindset is difficult, especially when a lack of basic knowledge on how automation works persist. It is highly critical for top management to adopt the leadership role in implementing automation in banking. At the same time, financial teams should develop a flair understanding of technology and its functionality. Otherwise, a full-scale adoption of automation will remain a distant dream. However, the next best bet for banks is to hire a professional third-party provider to sketch out the complete path for RPA adoption.

2. Incompatibility is a Major Challenge

The question of the compatibility of the RPA banking system with the existing infrastructure poses the biggest challenge to traditional banks. The age-old infrastructure might not align with the prerequisites. But, disrupting the traditional approach to banking might prove costly. The overall replacement cost is massive, which deters many bank leaders from opting for full-scale automation of banking processes.

However, this challenge is not impossible to overcome. But a lot depends on leaders – how clear are their visions on implementation plans?

Having a centralized team can easily expedite the implementation process with ease. Else, third-party providers are there, ready to offer services at cost. Banks need to decide quickly; otherwise, staff will never get acquainted with the new automated system.

It is pivotal for banks to carefully assess each banking process and its overall impact before pinpointing feasible ones for automation. To ensure proper alignment of the advanced technology with the existing infrastructure, leaders should have a clear picture of how roles and responsibilities are distributed across the business’s length and breadth. Minus that knowledge, it will become quite impossible to shortlist processes that require immediate attention from automation.

However, these hurdles are not impossible to overcome; proper planning and strategic implementation can smoothen the entire transition phase for banks. Only a full-scale knowledge of automation in banking benefits can work as a catalyst for change. Let’s take a look at them –

Benefits of Automation in the Banking Industry 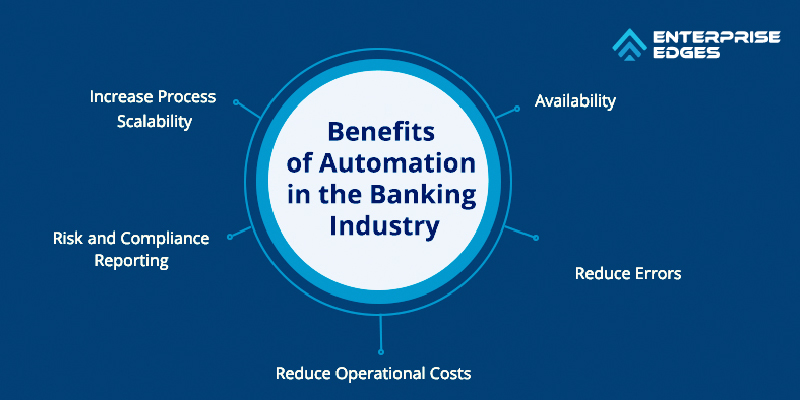 Robotic Process Automation benefits are manifold across sectors. Companies that have already implemented automation have witnessed overall cost reduction by 15-25% and even more. The average ROI for RPA is estimated to reach above 250%, as per reports.

Even financial institutions are not far behind in adopting full-scale automation of banking. Experts state that 80% of leaders in the financial sector are already using automation in specific business areas.

For instance, Santander recognized the opportunity and automated 5 customer-facing processes, including car loan applications, bank account management, and bank loan management. The bank deployed 150 RPA bots across various departments. As a result, Santander saved over 30,000 hours of manual processing time per year. That scaled its customer service to another level altogether. Santander recorded its highest quality performance in over a decade in 2021.

The primary function of robotic process automation in banking is to automate key areas that are repetitive and involve too many human hands. There are several benefits of RPA in banking, a few of which are described as below –

Managing multiple processes at peak business hours is humanly not possible. Automated tools can easily manage high volumes and efficiently respond to situations in record time. This leaves enough bandwidth with employees to focus on R&D and other value-ended tasks.

RPA in banking allows banks to reduce their dependency on the human workforce, allowing processes to become more efficient and productive. Less dependency on human hands reduces operational costs for banks and processing time by 25-50%.

Robots work 24×7. This is much-needed to render effortless customer services and improve customer experience with banking. Customer grievances are easily heard and dealt with promptly. Robots can simultaneously cater to multiple customer inquiries, unlike human customer care executives. Hence, it is highly unlikely that a few customer complaints remain unopened or unaddressed.

To err is human. Placing too many humans to cater to multiple tasks simultaneously can give rise to errors. That can prove damaging to a bank’s overall reputation. Implementation of automation in banking can arrest such blunders and enhance the overall efficiency of banking services.

Opportunities for Automation in Banking 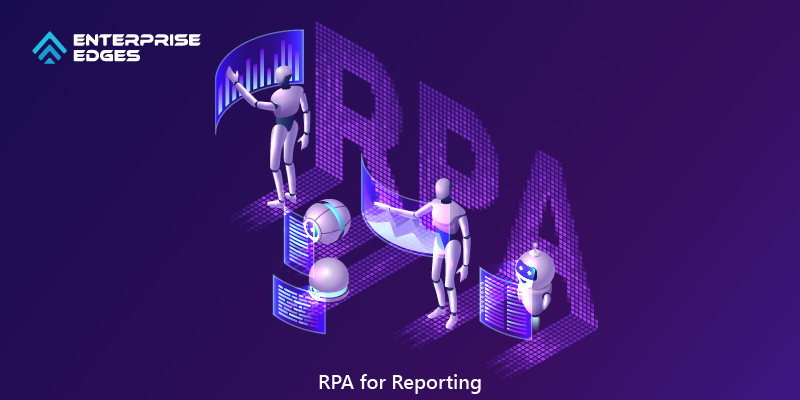 Banking and financial institutions have to prepare annual reports of their performances and challenges and submit them to the board of directors, as per compliance rules. But, manually recording, documenting, and reporting each process is time-consuming and hefty, to say the least. Using the human workforce in such mundane tasks leave enough scope for irreplaceable errors.

Banks like Societe General Bank Brazil incorporated RPA into reporting to scale up the entire process and cut down the invested time consumed by employees by 6 hours.

According to reports, banks initially took 60 days to close any mortgage loan. The steps involved in processing a mortgage loan were filled with intricacies, with multiple steps and varying inspections involved. Any significant error in either of the steps could have easily slowed down the already slow process.

Studies showed that automation in banking cut down loan processing time by 80%. That’ll be a massive relief, both for clients and banks as well.

For example, Radius Financial Group incorporated RPA in loan processing and witnessed reduced loan processing costs by 70%. Moreover, the bank could handle 50 loans simultaneously even though they struggled with just 30 loans at a time. Recently, Radius has registered 30% more loan production revenue than others in the industry. 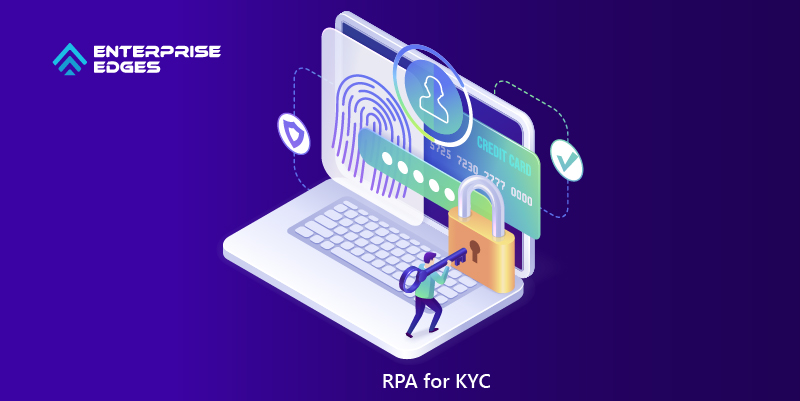 KYC or Know Your Customers is an integral part of banking. But, performing KYC on every single customer cost banks $384 million per year and consumed 1000 full-time equivalent hours. Even then, many banks suffered €50 million per year in loss on KYC compliance sanctions.

Fraudulent activities are rampant in the banking sector. Money laundering is undoubtedly the major area for concern, and anti-money laundering compliance cost $31.5 billion for financial institutions in both the US and Canada in 2019. Moreover, high-skilled analysts needed to address such issues had to invest 75% of their time collecting and collating data and another 15% documenting them in the system. Automation in banking can only streamline the process and reduce the overall time taken, thereby allowing anti-fraud professionals to focus on other important areas.

There are ample opportunities for robotic process automation in the banking industry, many of which have not been fully explored. However, the mentioned benefits and opportunities can serve as a perfect eye-opener for banks that are still hesitant to completely resign their traditional approaches to banking. Nevertheless, the changing dynamics of the market will eventually bring more and more banks under the RPA umbrella. Banks that fail to leverage the change effectively will eventually fade away in the face of competition. Needless to say, automation in banking is here to stay. The sooner the banks realize that, the better it is for them.

Significance of Robotic Process Automation (RPA) in The...

How Robotic Process Automation Changes the Face of...

Robotic Process Automation: A Gift for Many Industries